In 2017, we saw a paradigm shift in the treatment of NSCLC where pembrolizumab (CPI) has become a recommended first-line immunotherapy:

The result is that chemotherapy is no longer considered preferred treatment option for these patients.

Molecular profiling is essential to determine the presence of a particular mutation and appropriately plan immunotherapy treatment.

Immunotherapy is rather expensive and its uptake in particular regions and individual countries is gradual due to budgetary limitations. Molecular profiling is also not available at all treatment centers worldwide, mainly being an option only where immunotherapy is also available.

In many European countries, patients can receive certain treatment modalities if they participate in national treatment programs. In turn, a limited percentage of patients meet the criteria required for entry into these programs.

The very first step is to clearly understand how to define the US SoC. Between April-2017 and April-2018 we analyzed US SoC and compared them with treatment modalities used by ex-US sites.

The table below is based on US investigators’ responses and indicates the chemotherapy regimens that should be specified as acceptable in the protocol.

For the sake of expediting analysis, we grouped countries into 4 regions based on differences/similarities in SoC:

We then grouped preferred regimens based on mutation status specified by the protocol:

Below we present our findings collected during 2017 and 2018, with a focus on current trends and changes in NSCLC SoC within a 1 year period. 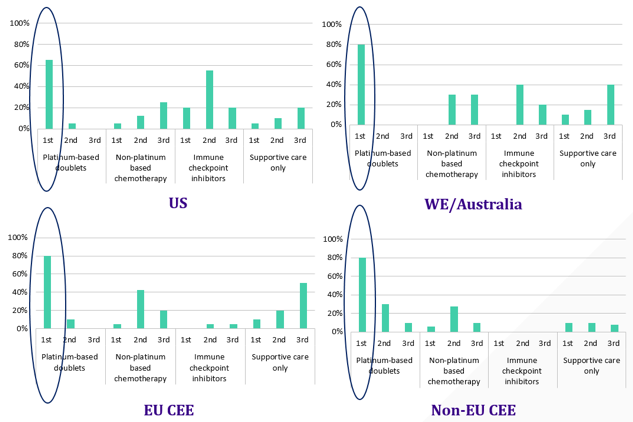 Platinum-based doublet is the most common 1st line regimen in every country assessed (65% in the US and 80% median ex-US). However, the single Greek site that responded uses this regimen only 50% of the time in 1st line. In Ukraine, although the median use of this regimen was 70% of the 1st line, one of the responding sites reported using it only in 37%, predominant treatment option at this site is supportive care. In Spain, although the median use is 90% in 1st line, one of the responding sites reported only 20%. This site allocates up to 40% of patients to clinical trials.

CPIs are used 20% of the time in the US for 1st line therapy but only up to 5% on average ex-US. The only other countries with comparable use are Belgium (20%) and Australia (15%). There is moderate1st line usage in Germany (12.5%) and Greece (5%). All other countries have low to no use of CPIs as 1st line. 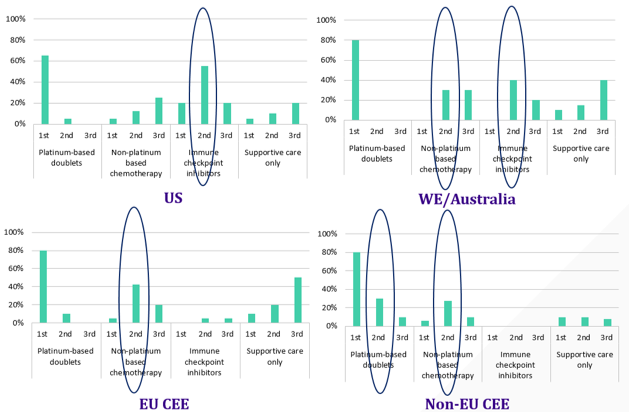 2nd line setting: US and WE/Australia use CPIs in the 2nd line treatment, though a considerable portion of patients in WE/Australia are still treated with non-platinum based regimens.

Non-platinum based chemo is used as 2nd line in the US 13% of the time. The UK is the most similar country to the US, at 20%. CEE countries are also proceeding with this treatment approach. Romania is the first using it 60% of the time. 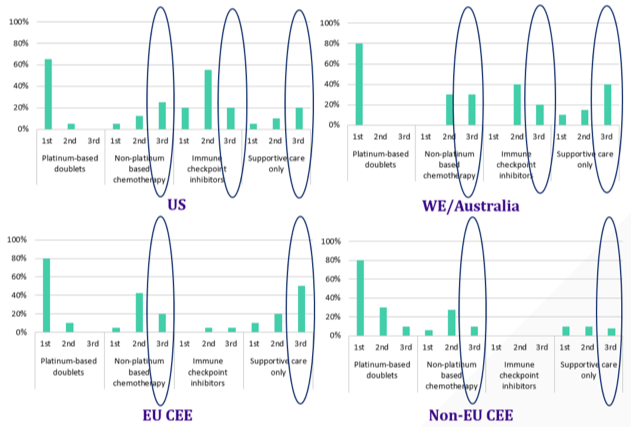 Treatment approach in the US is almost equally divided between supportive care, CPIs, and non-platinum based regimens. Italy and France have the most parity to US CPIs usage at 50%. Supportive care is most frequently offered in Poland, Hungary, and Romania 50-80% of the time and non-platinum-based chemo is most frequently used in France 50% of the time.

Ukraine is the only assessed country where TKIs are not covered by health insurance and thus not used in this setting. Platinum-based doublets are still the treatment of choice. 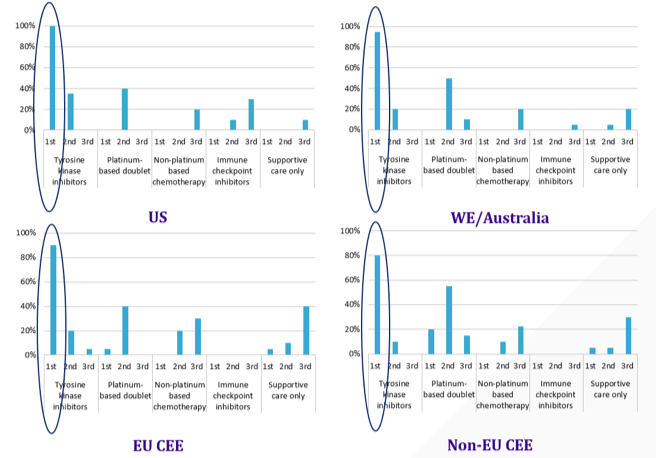 TKIs are used 100% as the 1st line in the US with the ex-US median being 90%.  Russia has only modest usage of TKIs, used in only 35% of the time. None of the Ukrainian sites use TKIs at all.

2nd line setting: Platinum-based doublets are mainly used in the 2nd line in all regions across all regions.

TKIs and CPIs are more frequently used in the US compared to other regions. 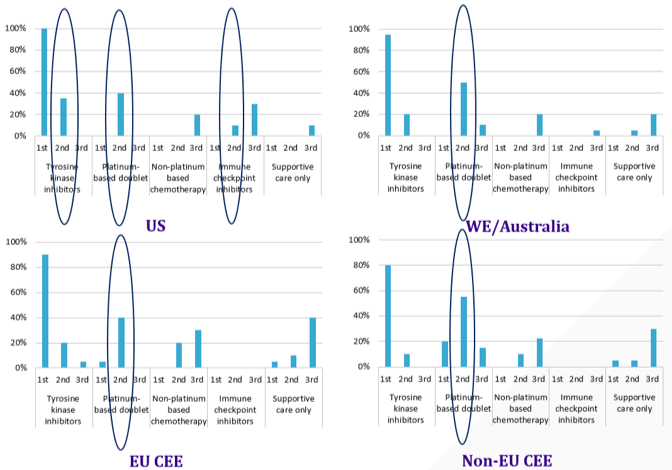 CPIs are used as 2nd line 14% in the US and only 4% ex-US on average.  They are not used for this line in Greece, Spain, UK, Ukraine, and Serbia. 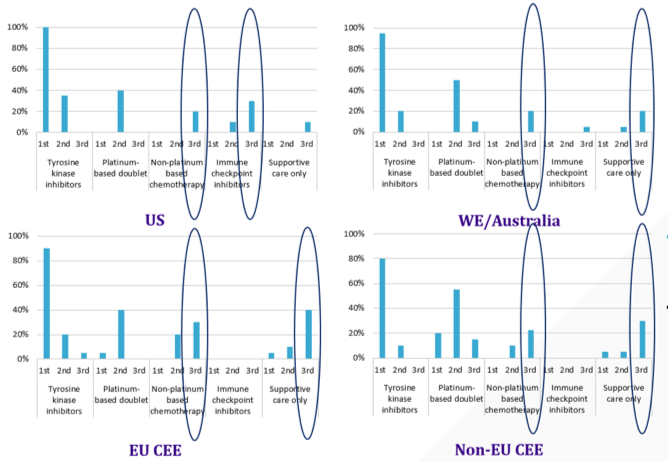 CPIs are mainly used in the US at 30% of the time. Only Australia (28%) and France (23%) as ex-US have a comparable approach. In some other ex-US countries (Germany, Italian and Russian sites) platinum-based doubles are offered to almost all patients at this stage.

1st line setting: CPIs are widely used in the 1st line setting in the US and more and more in the WE/Australia, though France, Italy, and the UK still have more trust in platinum-based doublets. In these latter countries, CPIs are saved for later lines.

Platinum-based doublets are still the cornerstone of the 1st line treatment in CEE and non-EU CEE. 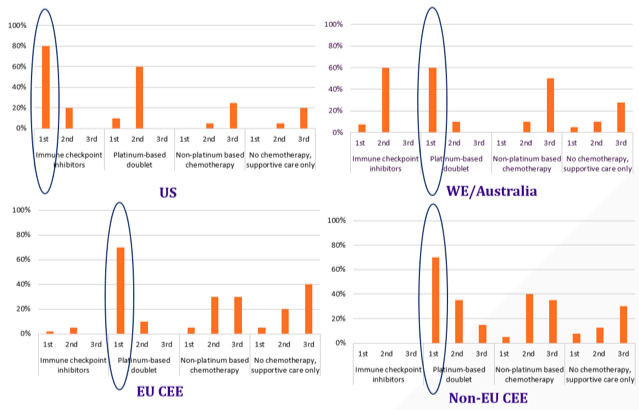 CPIs are used 80% of the time for1st line therapy in the US, while ex-US use is still very low up to 10% median. France and Hungary do not use them for this line of therapy, and use in Ukraine and Serbia is on average just 1%. Poland’s average use tracks at 5%.

Platinum-based doublet is the other acceptable 1st line therapy. In the US it is used 10% and ex-US 60% of the time. Greece does not use this therapy for this line. 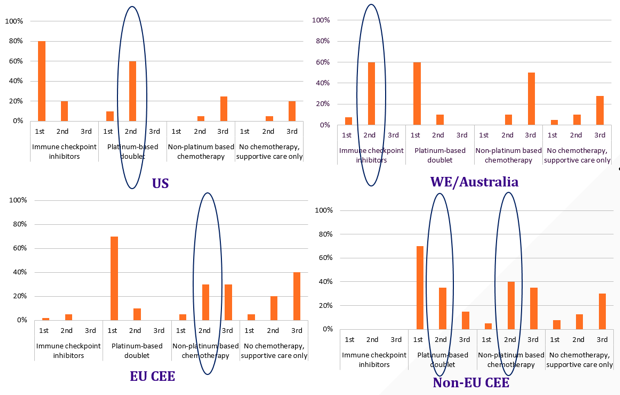 The highest uptake is observed in Italy, Belgium, and Spain. 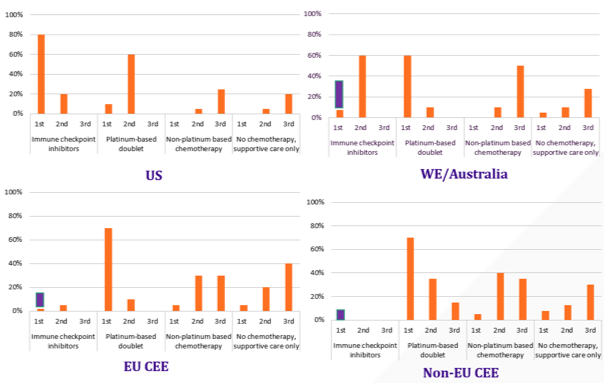 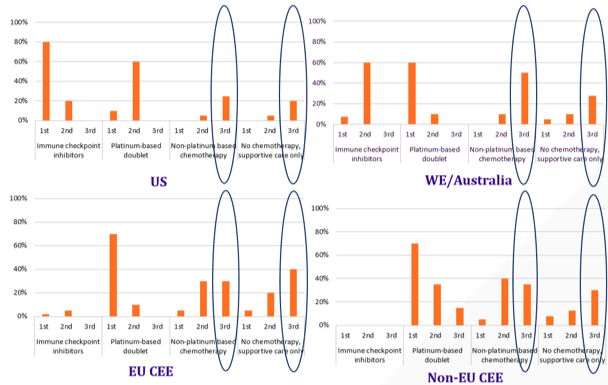 1st line setting: Treatment is comparable across the US, WE/Australia, and EU CEE – ALK inhibitors. However, Polish sites still widely use platinum-based regimens in the 1st line setting.

In non-EU CEE region platinum-based doublets are still the backbone of treatment due to budgetary limitations. 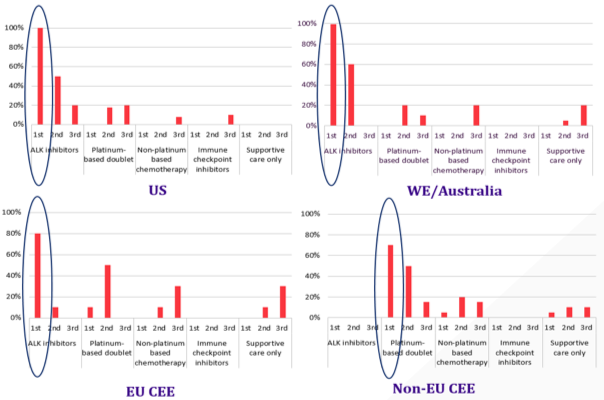 Romania and Bulgaria precedes in both settings. 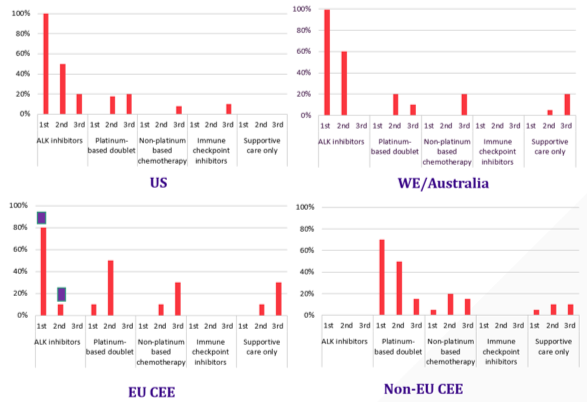 2nd line setting: Treatment is comparable between the US and WE/Australia – ALK inhibitors. In EU CEE and non-EU CEE platinum-based doublets are mainly used, though Hungary and Poland have solid access to TKIs. 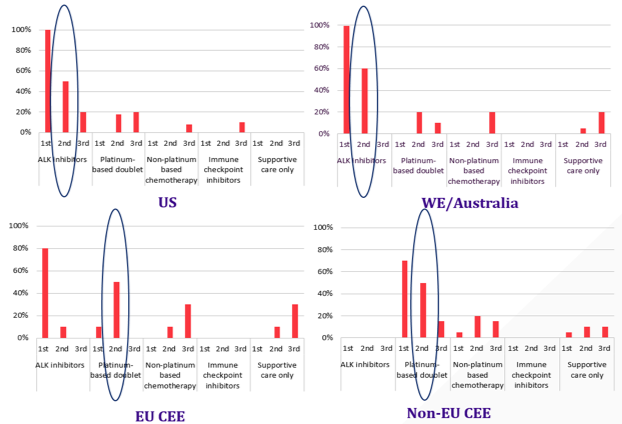 2nd  line use of ALK inhibitors drops but is still sizeable, with 50% in the US and 30% ex-US.  Belgium and France use this approach in 80% of patients. Greece and Ukraine are both in 0% and the UK in 13% of patients.

The platinum-based doublet is the other acceptable 2nd line therapy with 18% use in the US and 20% ex-US. The responding Bulgarian site indicated2nd line usage of 3%. Additionally, Polish (7%) and Hungarian (5%) investigators indicated very low usage of this regimen.

3rd line setting: ALK inhibitors are used in the 3rd line treatment in the US. In other regions platinum/non-platinum based chemo or supportive care 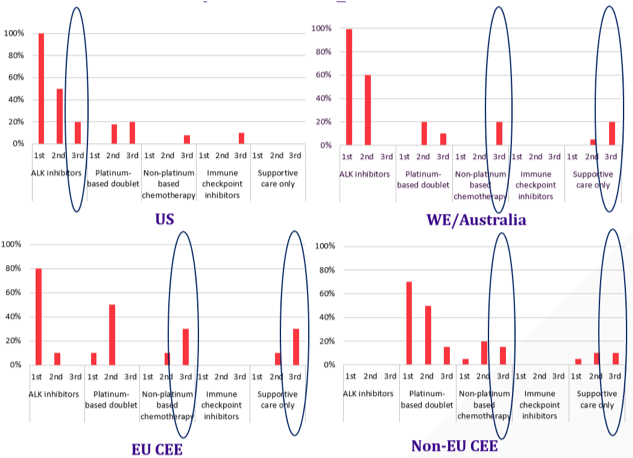 ALK inhibitors are used in the US 20% of the time. The median in ex-US regions is 0%. Belgium and France are only countries comparable to the US in their approach to ALK treatment, using it in 25% and 30% of the time respectively.

In conclusion, there is clearly a diversity in the degree to which other countries conform to US standards of chemotherapy care in NSCLC.

And more changes in SoC are on the horizon.

In fact, the SoC in NSCLC treatment is changing every day. New agents and combinations of drugs are being tested and approved every month. There are many new targeted therapies both in the pipeline and already on the market. In 2018 FDA approved afatinib (Jan-2018), darvalumab (Feb-2018) and osimertinib (Apr-2018) in different line settings; in April 2018 FDA also granted priority review for frontline use of the PD-1 inhibitor pembrolizumab in combination with standard chemotherapy. Some new approvals are also expected by the end of 2018. Our analysis did not include treatment approaches used in BRAF, KRAS and HER2 positive NSCLC patients. This would further complicate the analysis.

NSCLC treatment is a very dynamic environment and changes in SoC are expected every couple of months. To be able to keep up with different protocol requirements, especially in Phase III trials when the global involvement is needed, a reality check of SoC is crucial for proper study planning. Nevertheless, if the time between feasibility and study start is longer than 6 months, there is a greater risk that some countries/sites will no longer be suitable.